Part Eighteen – Do You Smell Something?

With traveling comes more bumps in the road, and unfortunately these bumps are a little embarrassing to write about, but here goes. The reality is that we use our toilet, and ever since we began using the toilet we’ve noticed a very strong waste smell. The smell seems more prominent when we are moving at faster speeds, and especially when we’re moving and have a window cracked.

When we first noticed the problem, we quickly attacked the problem with black tank additives. We also added a 360 Siphon cap to the roof vent, which is supposed to draw air from the tank with any air movement across the vent pipe. We always flush all of the tanks between trips, and are very “by the book” when it comes to flushing and sanitizing all of our tanks.

This was on my repair list when we visited the Roadtrek factory for service, but they were unable to solve the problem. As we went into the colder months we of course stopped using our plumbing, so instead of heading back to the dealership we decided to just deal with it, and asked for some advice from our friends on the internet.

To be clear I am not a plumbing expert. In fact I HATE plumbing and would never attempt any major repairs on my RV (unless pinching a few heating pipes or giving them a good smack as the manufacturer recommended counts as major repairs). These are the steps we’ve taken to isolate our stinky problem:

1 – Make sure that all waste traps have water in them.

Since our RV is so compact it is difficult to pinpoint the exact source of the problem. Some fellow RVers suggested that the smell could actually be coming from the odors crossing over from the black tank to gray tank.

2 – Keep at least a couple gallons of water in the waste tank, and keep a little water in the bowl at all times.

With only a 10 gallon black tank capacity this seems like a rule worth breaking, but no matter how much water is in the black tank the smell is still there.

3 – Treat the gray tank as well as the black tank with chemicals.

We’ve experimented with many treatments to the black tank (Happy Camper, the blue tabs filled with powder), and now also treat the gray tank. Since we are only on the road for a few days at a time there’s really no need to add any chemicals to the tanks from what I’ve read. The tank treatment solutions are really intended for larger black tanks where you don’t flush them as often.

It was very easy to remove the panel under the bathroom sink and verify that the threaded connections were snug. The trap under our kitchen sink is a a Hepvo waterless valve. This means that no water is required to be in the trap to keep the waste line sealed. After a lot of sniffing around I’m fairly certain that the odor is not coming from the kitchen side. 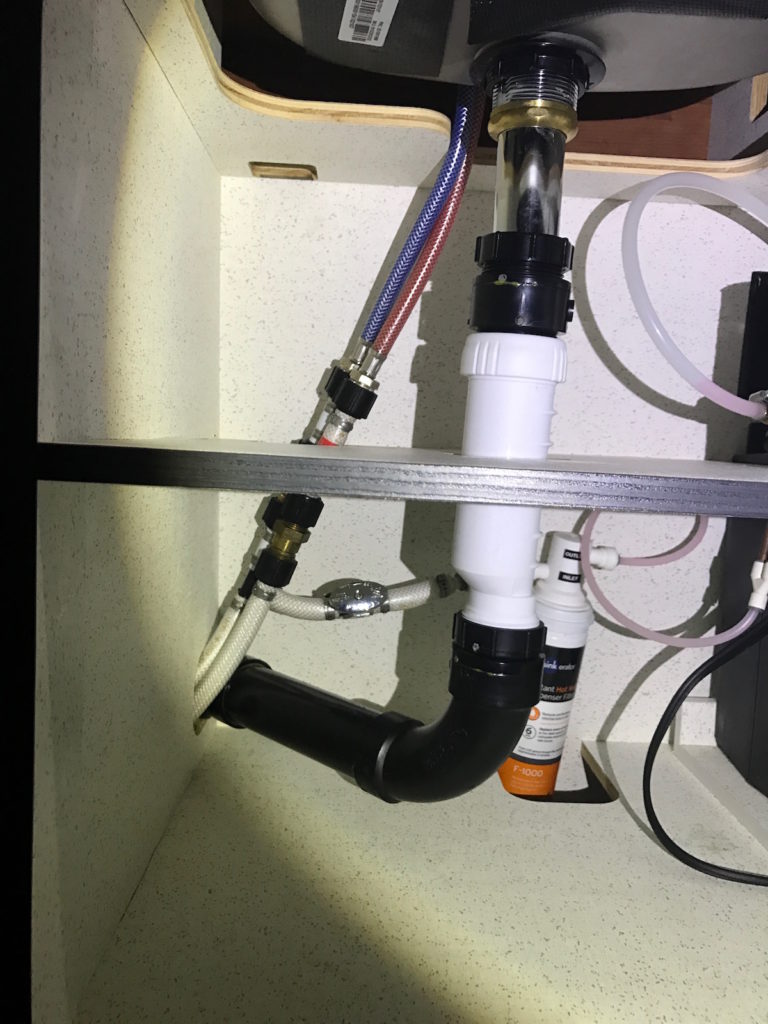 A peek under the sink – the white section of pipe is the waterless trap.

Is this something that I have to learn to live with since I’m driving around with a tank full of waste, or is there something wrong here? Does anyone else have this problem? What do I tell my mother who’s riding in the back when the smell creeps in? And what about the people who stop you in the parking lot of a shopping center and want a tour – should their tour include nose plugs?

We should be hitting the road for another weekend adventure, but once again the van is back at the RV dealership being repaired. This will be the third consecutive weekend it’s been at the dealership, and I still have no estimate for the repairs to be compete.

In addition to the black tank odor, we decided to have a few other items taken care of. Because of our Alde leak back in November we were forced to use a different brand of glycol not recommended by Alde or Roadtrek. The dealership is flushing out the system and replenishing it with the clear propylene glycol – or whatever they were told to put in by either Roadtrek or Alde. We made a decision to keep the current Alde boiler, even though Roadtrek offered to completely swap it out. If I was able to return to the Roadtrek factory it’s something I definitely would have done, but I don’t know who I would trust to have the knowledge or experience to pull and replace an entire Alde unit. I think it’s a better option to take my chances and hope my earlier repairs solved the leaking issue.

Something is still not right with our solar system and maintaining a charge on the batteries. I have 470 watts of solar on the roof with 8 AGM batteries. With only my refrigerator running on 12v, I lose almost 1/2 of my charging capacity if the van sits idle for a couple of weeks. I do keep it parked with plenty of sun exposure during the day. On paper I should have enough solar to run the refrigerator and keep the batteries topped off with power to spare. And this is how the solar is sold to the customer – they don’t charge a low battery, but won’t have a problem keeping them topped off. 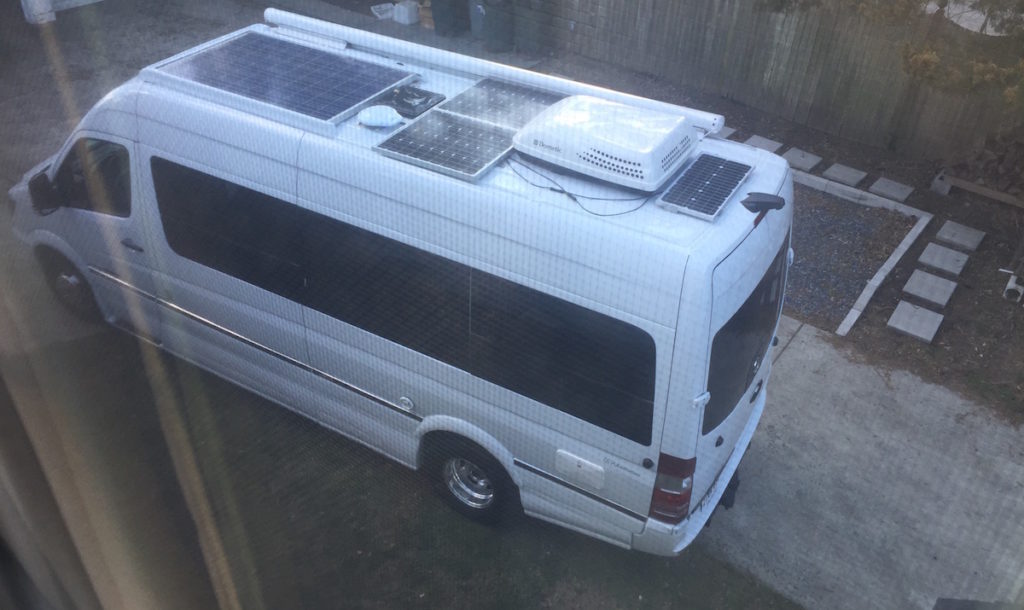 A look from above at our 470 watts of solar.

My propane/carbon monoxide detector has decided to sound in the middle of the night. It’s done it twice in the week leading up to my service appointment while parked in my driveway. Who knows what time it activates overnight, but I never hear it until I leave for work in the morning… I’m pretty sure my neighbor now hates me.

We have made a decision that this will be our last trip to the service center for major repairs. I just don’t have the energy or desire to continue the back and forth drive to the dealership for more and more repairs. I honestly don’t know the mindset of the average RV owner. Does John Q. Public and his wife Nancy purchase an RV knowing that sure, it will take them to Florida and back and the occasional trip to visit the grandkids in Ohio, but they better be prepared to become amateur repair technicians and love looking at an empty parking space in their driveway while it’s in the shop again for a significant portion of their ownership? I suppose that’s possible, though I doubt it. I’ve seen so many people walking around these RV shows and they don’t look browbeaten by their RVs like I sometimes feel. And honestly, for the incredibly high purchase price involved for especially these Class B vans, I would hope you could visit Michigan in November and expect that the fancy heating system the sales person was so excited to show you would actually heat instead of treating you to the joyful experience of waking up in a 40 degree van in the middle of a Cabela’s parking lot.

As we look forward to traveling in the fall, we especially look forward to once again attending the Hershey RV Show in September. That is where my journey started almost 2 years ago, and where the next chapter may begin. As long as the shop finishes my current van before then.

We finished our last post in January and while it seemed like an ending, it was not. We still have decisions to make about our RV ownership. But there’s one decision that we did make, and that is to hold off on doing any additional repairs and just get out there and enjoy having an RV!

After leaving the RV show in Florida we didn’t know what to do. We were excited to see all of the new offerings, but to be honest nothing really spoke to us enough to trade up. If there was an RV that had the matching “advertised” capabilities as the Roadtrek, then we certainly would have made a move.

As I may have mentioned in earlier posts, I work full time and a small RV has given me the freedom to venture away from home for 2 to 3 days at a time and remain completely self contained. Our 2 longest adventures so far have been to the Roadtrek factory in Canada, and the RV show in Florida, both about a week or so away from home. 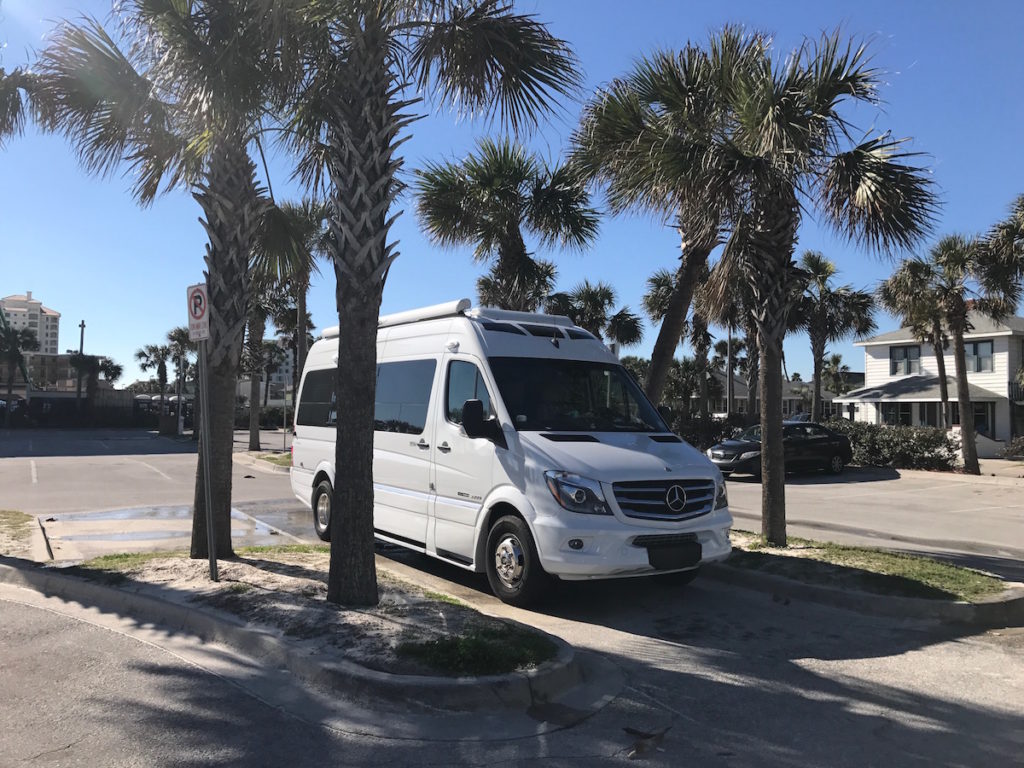 Hiding under the palms on our trip to Florida

Yes, we’ve experienced many, many bumps in the road, but don’t let this discourage you from considering a Class B RV, or any RV for that matter. I’ve learned over time that problems will arise, and sometimes will take several attempts to get fixed. I don’t know if this is just the way it is, but repairs that you would think should take a couple of days usually take a couple of weeks, sometimes more.

Since the main systems seem to be working on our RV, we’ve finally had the confidence to hit the road and enjoy the sights, and for a change not have to focus on getting problems repaired. At the same time we’re taking notes on how we use our RV, and if we do make a change we want to pick the RV that best suits our needs.

I am glad we made the decision to purchase a van on the Sprinter chassis. I am still a little nervous about finding diesel in the less travelled areas, but we’re averaging about 18 mpg so a tank of fuel goes a long way. The van is also very easy to drive, and easy to park too. I have no problem parallel parking or fitting into a standard parking space. We are still much longer than a standard car or truck, so if we park in a shopping center I prefer backing into an end space so the back end is against a curb. I do wish that the stock navigation system was better (the screen flickers when going over bumps – bravo Mercedes), and the backup camera has a very narrow field of view, but these are minor annoyances that we can live with. 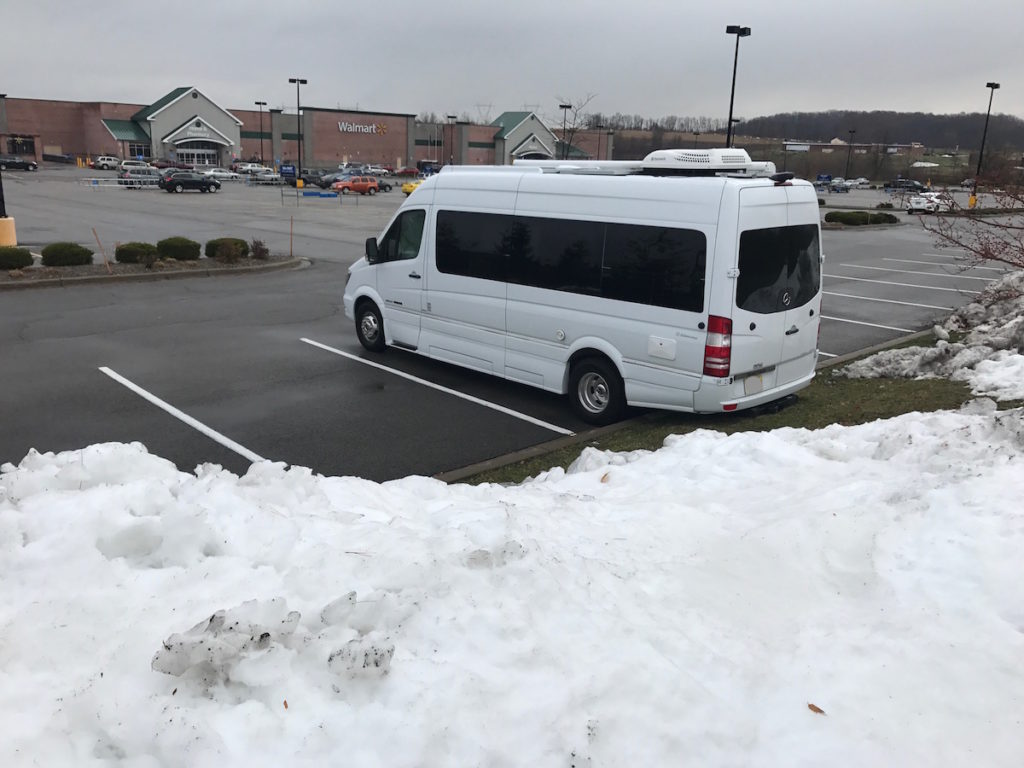 Stopped for the evening at Camp Walmart

The CS Adventurous has a bench sofa in the back that converts to a bed. The cushions just don’t give us enough support, so we’ve added a foam topper to the bed and it now works great. Once we set the bed up on the first night out, it’s just too much work to disassemble it in the morning. It’s a bit of an ordeal to put the topper away – we roll it up, bag it, and use a portable vacuum to compress the bag into a zippered fabric cover we made just for this purpose. The comfort it adds to the bed is worth it though. And luckily we have three seats in the front which convert to a nice dining area, so keeping the bed set up works for us. 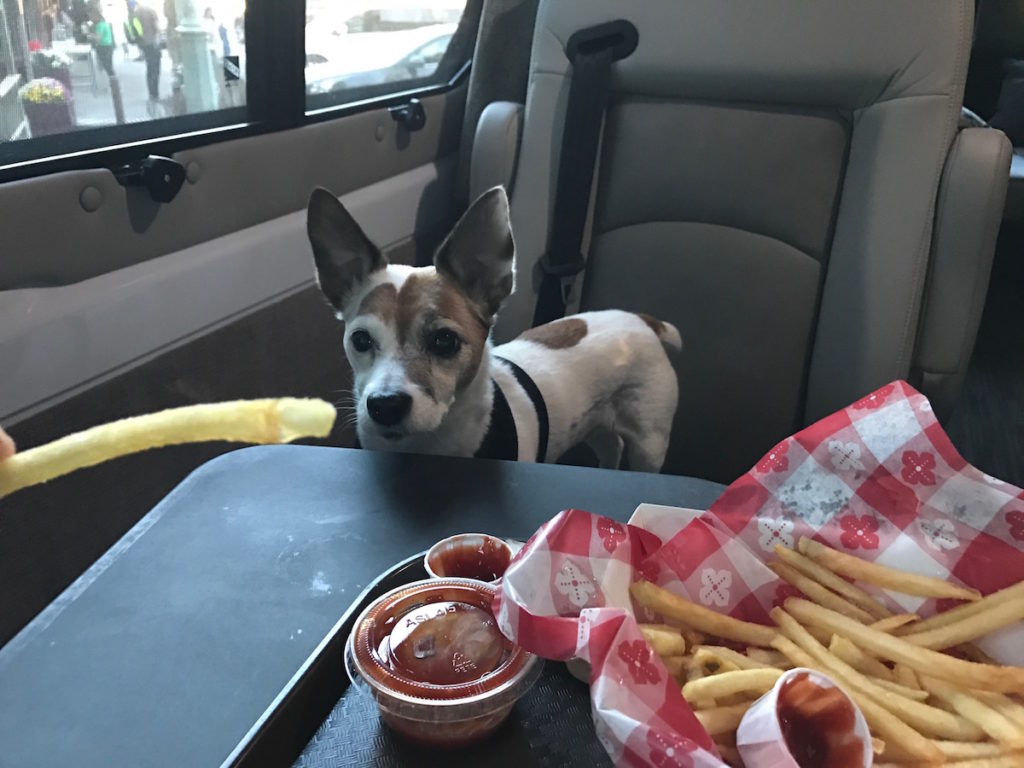 Would you like fries with that? Our co-pilot Penny says absolutely!