Part Twenty One – You Touch It, You Buy It

It’s been over a month since our last Chapter, and not much has changed with our toilet problem. My frustration continues to build once again because we’re now stuck in the middle of a warranty claim dispute between our service center and Roadtrek.

I had contacted Roadtrek directly after the replacement toilet didn’t solve the odor problem. The Roadtrek representative looked up my warranty history and found no record of any work being done on the toilet. I was surprised by this since not only was it at the factory for repairs, but it had also just been in the service center two times back to back, and was there for over a month. At first we thought that maybe it takes time for everything to get entered into the computer system. I would soon learn otherwise.

I called Roadtrek to ask them to authorize replacing the toilet with a different brand. I also asked if I could take the van to another service center for the next round of repairs. Since no repairs were “technically” on record with Roadtrek, they said I could take it to any other service center, but it would have to be a Roadtrek authorized facility, and it would have to be the same brand of toilet. So I figured why not. Maybe with my bad luck we got another defective toilet. I called another dealer to make the appointment, only to find out that the earliest available appointment would be in mid-December…that would have been two months more to wait! That’s not going to work since the van would have to be winterized soon.

I called my original service center to get some more details as to what was done in the original repair, and what they thought needed to be done as a next step. As it turns out, my service center didn’t properly pre-authorize the toilet warranty claims so Roadtrek rejected the entire work order for both visits. It’s not really my problem since Roadtrek isn’t making me pay for the repairs, but my dealership has to eat the cost of the new toilet, including any time they spent diagnosing and repairing the problem.

I think it’s obvious that I haven’t always been on the side of my service department, but this time I have to stand behind them and say how wrong it is of Roadtrek to deny the warranty claim. I don’t know how the process is supposed to work, but all I know is that the dealership jumped on my repair when I showed up at their door at 7AM on a Monday morning when I realized that their first attempt to fix it failed. This may sound bad enough, but it gets better. Since my service center touched the toilet, anything else done to resolve the waste odor issue is considered to be “rework” and is the responsibility of my service department. So not only did they not get paid for the original repairs, they now have to fix it again until it’s repaired, for free! Now how can I expect my service center to take any time to properly diagnose and fix this once and for all. If we’re going to play warranty games I think it’s important to bring up the fact that the toilet problems have been present since the van was new and we first used the black tank, and it was first ‘repaired’ at the Roadtrek factory when we visited a year ago with a list of other issues to be addressed.

As we sit and wait for the next step, we’re doing what we can to better isolate the odor breach. Now I know that I can’t start pulling things apart to diagnose the problem, or I’ll be in the same position as my dealership.

We fished an inspection camera all the way down the roof vent pipe and it’s all clear. There does however appear to be a screw sticking into the side of the vent pipe. I don’t think this is causing any odor problems since the hole is sealed with the screw, but I can’t say for sure.

I think our next test proved to us beyond a reasonable doubt that the odor is coming from the toilet, and not the gray tank. We encapsulated the toilet behind a tarp and sealed it to the wet bath walls using packaging tape. We then went for a drive with the windows cracked. There was no noticeable odor inside the cabin so we pulled over after about 15 minutes. I peeled back the tarp and sure enough, the odor was present but trapped under the tarp. 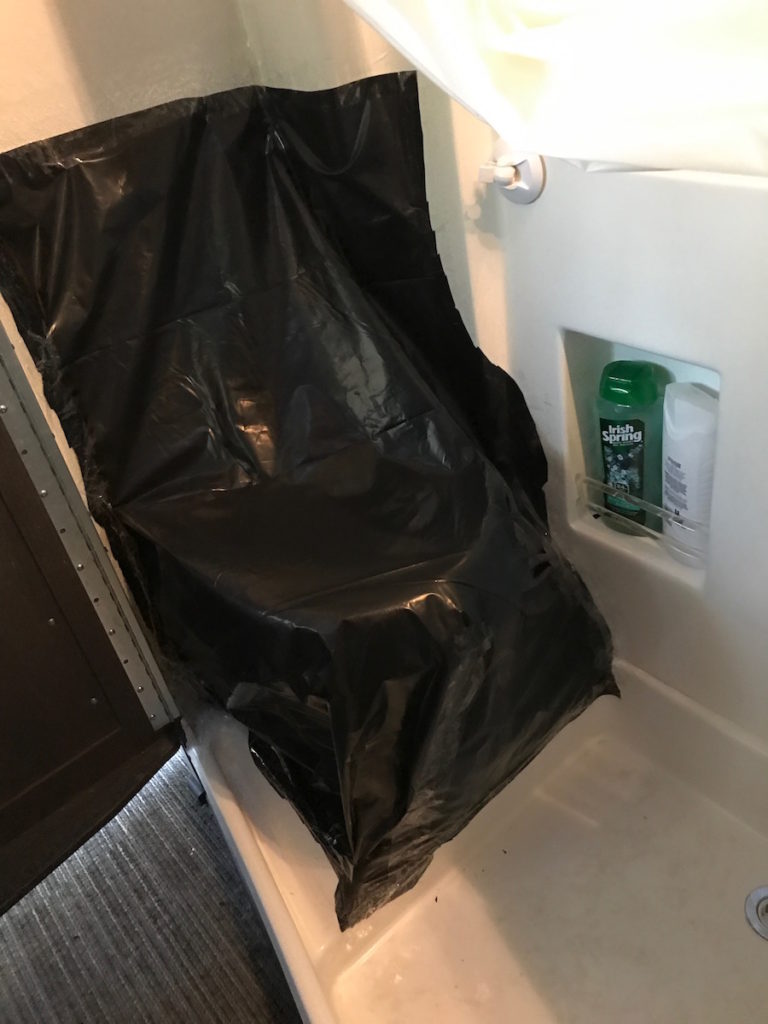 Maybe we just have another bad toilet? Maybe it’s a bad seal between the toilet and flange? I then took a look under the toilet below the foot pedal and you can clearly see the rubber seal and how it’s compressed tightly against the toilet flange. I then noticed a gap of about 1/16″ between the flange and wet bath floor. This did not seem normal, so I asked in the Facebook group for other owners to take a look, and sure enough I’m the only one that has the gap. Maybe it’s not the toilet after all. Maybe there is a crack or bad connection between the waste tank and toilet and this gap is allowing the odors to be sucked into the cabin when the window is cracked. 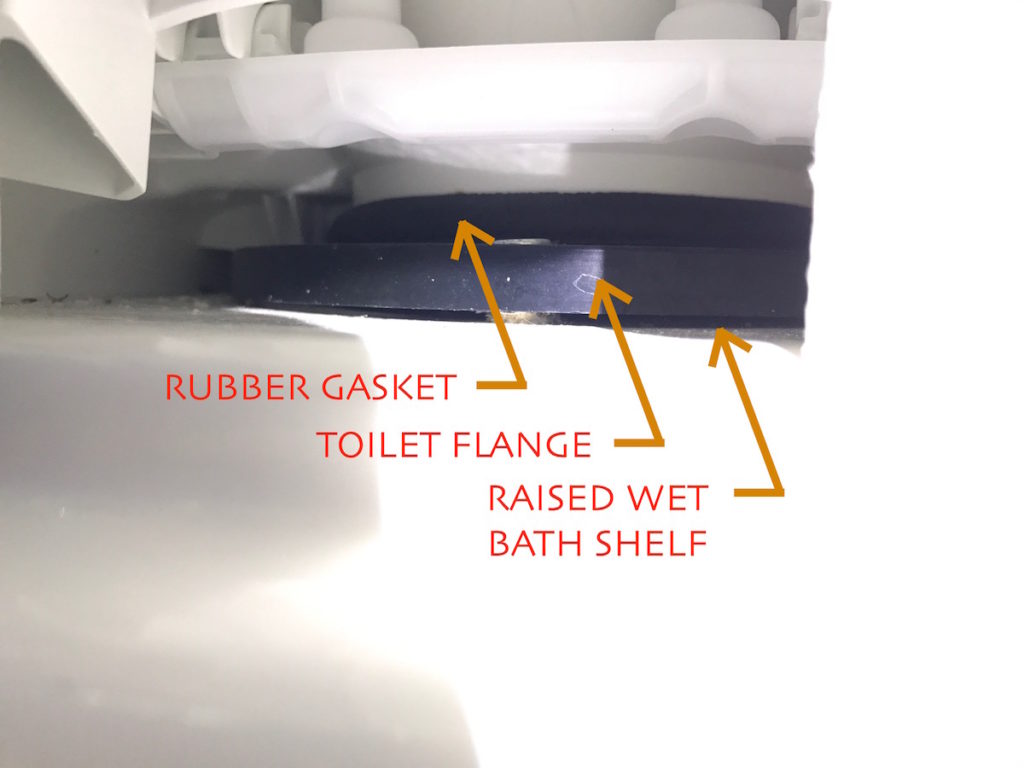 So as the temperatures begin to drop, the hope is fading that we’ll get this fixed before we have to winterize. We now wait for a callback from the dealership, and it’s been over a month. I appreciate the 6 year warranty, but I really didn’t think it’s going to take 6 years to get everything working.