I understand and accept the fact that things will go wrong with any RV – I know I’ve probably written this in previous posts. I just can’t comprehend why it’s happening so often, and multiple times to the same parts. I’m sure you can understand my shock and frustration that my Alde system was leaking again. Of course the system was nearly drained before we realized it. This time I knew that with a clamp I could in a “pinch” off the hose that runs to the auto bleeder valve and stop the leak temporarily.

I took a trip to the dealer to stock up on Alde propylene glycol, which as I’ve mentioned before is extremely difficult to find. Once I had replenished the system I decided to try to bypass the bleeder valve to see if it’s pressure or gravity causing the problem. I purchased some clear tubing and connected it to the side of the bleeder valve. Once the Alde system was running, fluid began filling the tube. It seemed like the warmer the fluid the faster the fluid would build up in the tube. This made me suspect that pressure in the system was pushing the glycol right through the valve, and the valve is designed to relieve pressure, not release fluid. I was also continuing to get air pockets in the floor which prevents the floor heat from working. 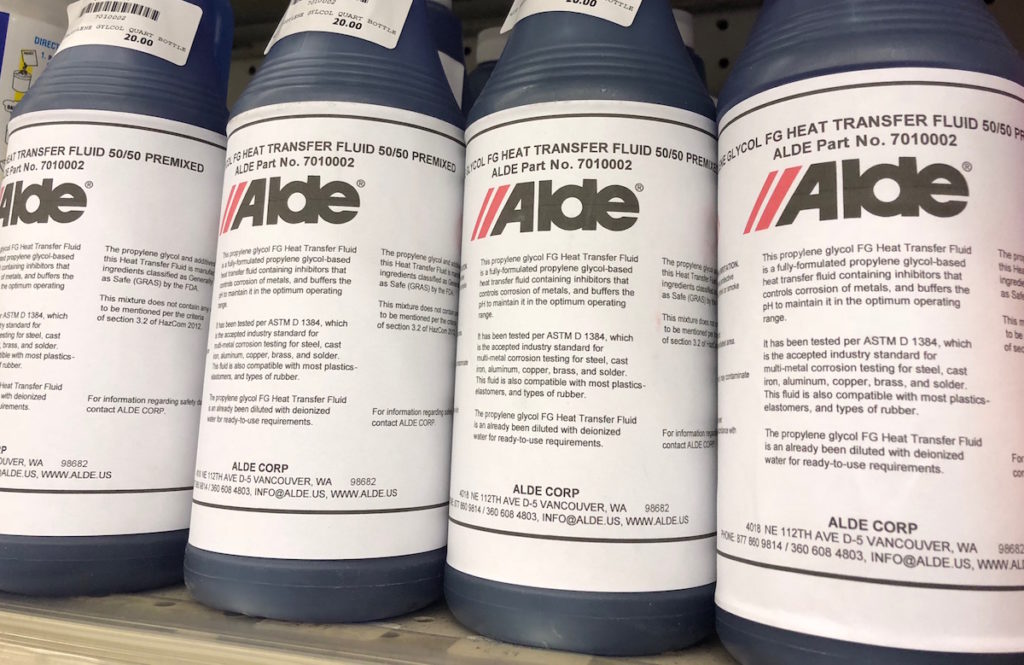 Stocking up on propylene glycol at our RV service center 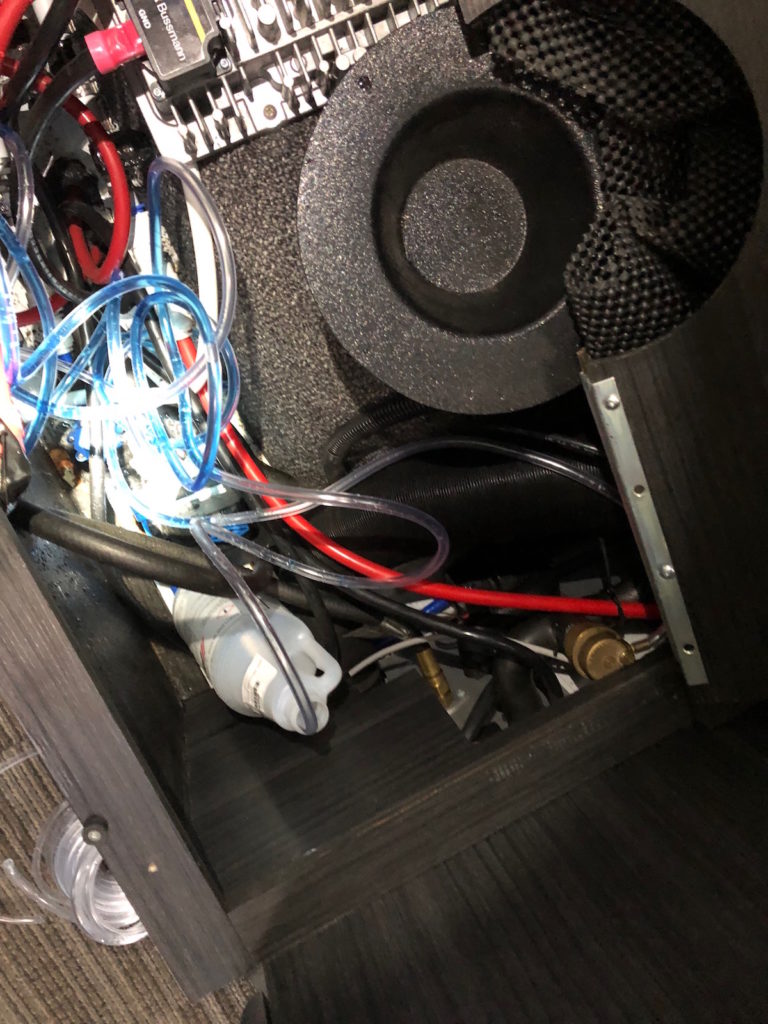 I know I’ve been critical of Roadtrek, but I will say that this round of repairs has been considerably better than the MANY interactions that involved them in the past. I began a dialog with a Roadtrek representative who was responsive with returning my phone calls and answering emails. I also reached out to Alde USA, who put me in touch with a technician that not only called me several times to diagnose the problem over the phone, but also kept in touch via text throughout the repair process. In my discussions with the technician from Alde, it was determined that something, maybe metal or plastic shavings from installation, could have entered the piping and collected in the bleeder valve. He also recommended replacing the ’T’ on each side of the floor loop. It was redesigned with a slight curve to better direct the flow through the floor and cut back on turbulence which could also lead to the air pockets.

A special bleeder pump was also required for this repair. This pump would not only be used to purge air from the system once repaired, it would be used to force fluid through all of the lines to dislodge any particles that may still be lingering. Alde was to ship out the parts for the auto bleeder, replacement glycol and bleeder pump. I had to contact Roadtrek and request what they call the Alde Upgrade Kit, which has the parts needed for the modified floor loop fittings.

The plan was to make this my final trip to the dealer to address all of the lingering issues and have a 100% working van. I wanted to have all of the parts on hand waiting for me, and everyone on board with the required repairs. At the same time I decided to try my luck with another service center, since the dealership I purchased from didn’t seem interested in making the appointment for the repairs.

Since I had pre-planned everything in advance I thought that this would be at most a 2 to 3 day repair. I stepped into the service department and met the service advisor in person for the first time, after speaking to him on the phone several times. The first thing he said was “can you remind me what you’re having serviced – it was a Travato correct?”  As you can imagine the confidence that I was feeling for this new service center was immediately gone. I’ve developed a pretty high tolerance for incompetence when it comes to RV repairs and just played along. My experience other than that was just fine. But all of the pre-planning that I did was a complete waste because Alde forgot to ship the parts to the dealership. So my 2 to 3 day repair once again became another 2 week repair. 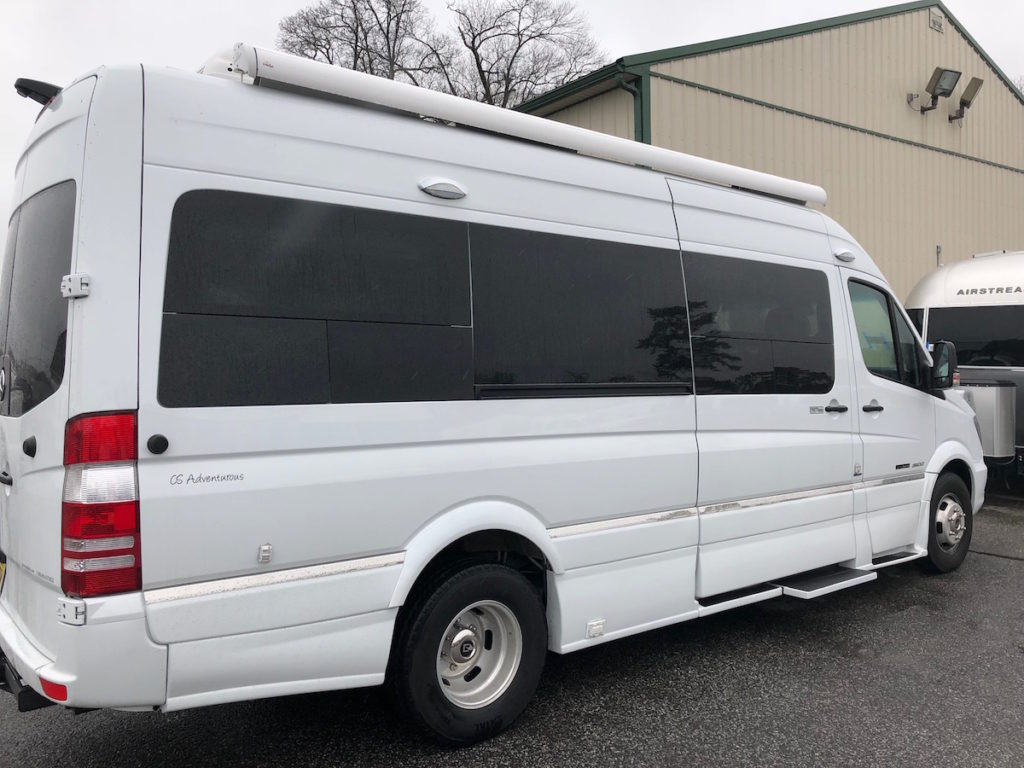 I can happily report that everything went relatively well once the parts arrived – in fact almost too well. What I didn’t know is that the Alde Upgrade Kit not only includes modified floor loop fittings, but also a newly configured convector with powered fans located under the rear bench. It was actually a pleasant surprise, since heat circulation from under the sofa when converted to a bed was poor, and now with the powered fans the hot air gets circulated throughout the coach. If you’re having problems with heat in your van give Roadtrek a call and mention the Alde Upgrade Kit – it may save you a lot of cold nights, and it may be covered under warranty! The system hasn’t leaked glycol since the repairs, and we’ve had several cold adventures so far to test the system.

Next up was the toilet. Despite my emails with Roadtrek, they either dismissed or ignored the links I shared describing our exact problem that others were also having with waste odors. There are are least two other people that have had so many issues with their Thetford toilets that they published a step by step process on how to diagnose and replace it. Here’s a link to both blogs if you missed our earlier chapters:

I put my trust in this new service center to give it their best shot despite my doubts. They removed the toilet and installed a new gasket. They also sealed the gap around the floor flange with silicone caulking. They then test drove and didn’t smell any odors. Did they finally fix the problem? Could this be the end of repairs? Nope!

As soon as we began using the toilet the problem was back once again. I’m now confident that the odor problem is worse during warmer temperatures, which is maybe why the new service center wasn’t able to easily duplicate the problem. When it’s cold it seems like you have to drive longer for the odor to take over. In warmer temperatures I can drive a few minutes and immediately smell the funk.

It’s clear in my opinion that Roadtrek, and their authorized service centers are unable to repair this toilet, and they will not cover under warranty the installation of an alternative brand. So I will take the advice of the other used-to-own-a-Thetford-until-the-smell-became-unbearable owners who were kind enough to share their own smelly war stories and I will replace it myself. We placed the order today and will hopefully be able to install it within a few days.

But will that prevent us from visiting the service center again? Unfortunately the answer once again is no. If you’re wondering about the second ‘step back’ in this post’s title, I would introduce you to my Norcold refrigerator, which is now doing it’s best impression of a warm pantry cabinet. A few weeks ago the refrigerator stopped cooling, and at the highest setting the freezer temperature gets down to around 40 degrees. Now I’m beginning to wonder if our lackluster solar performance was because the refrigerator compressor was constantly running. I’ll have more to report in another month as that’s the wait time for an appointment to get the problem diagnosed, with likely a week or more before it’s repaired. That’s life with our Roadtrek.

Despite all of the problems, we do continue to use our van and love the freedom that it gives us. We’ve been able to see things and go places that we’d never be able to go in a big Class ‘A’. That’s what makes this situation so difficult. We want to love this thing, and if we could get everything working just for a day we’d be thrilled.

Our Roadtrek is still for sale. Who knows if and when it will sell, which puts us in a tough situation. We have considered pre-ordering another brand, but the demand is extremely high and wait times are now ranging from 6 months to a year. If I do sell soon we’ll at least be free to purchase something used and see how it goes for a few years. Maybe buying used is the way to go as that first owner may just have all of the bugs worked out.