Even though we posted our first blog entry here in January 2016, as you read the story you’ll see that this journey started when we purchased our CS Adventurous on October 13th, 2015. That means that we have arrived at our two year anniversary together, and while I would love to write that we’re living happily ever after, in reality, I’m glad there were no kids and it’s become obvious we may need to separate. Time goes by so quick when you’re not paying attention, and to think that it’s been two years since we purchased our van and we’re STILL trying to fix problems with it is…disheartening to say the absolute least, and positively enraging to say the most.

Our last entry found us trying to solve a black tank odor in the van that occurred mostly when the windows were down and the van was in motion. Our van spent weeks at the dealer, was not fixed (because, and I quote from the work order, “the unit smelled fine when I was working in it”), was redelivered to the dealer for a few more weeks, and ultimately received a brand new toilet to finally solve the smelly issue that had plagued us since day one of owning this van.

We packed our cabinets and headed to Hershey PA to attend the yearly RV Show. We visited our friends at the Pleasure Way area and were impressed, as we always have been, at the models they offered and especially some of their new options like an auto-starting generator that is activated by temperature or voltage – sort of like our Voltstart system, except that a generator would run and not the van’s engine to give you some juice, which we hear now is not recommended by Mercedes. We stopped in to see Leisure Travel Vans, and as always, their offerings were impressive as well, though the almost 10 month wait time to receive one is a bit jarring. There was a demo available immediately, though, and we enjoyed hearing about life in that Leisure Travel Van from their ambassador who was there to answer any questions we had. It’s especially tempting to see these competitors when we know our Roadtrek ownership has not been smooth. But we finally had our van fixed and had decided that while it’s nice to look, if we could finally tie up these loose ends with ours, we would stick with it. In fact, we had a week long trip planned to follow the RV show with a drive west and north, and a ride back east along Pennsylvania’s Route 6 – a relaxing ride through the mountains with a whole list of parks and interesting stops along the way. 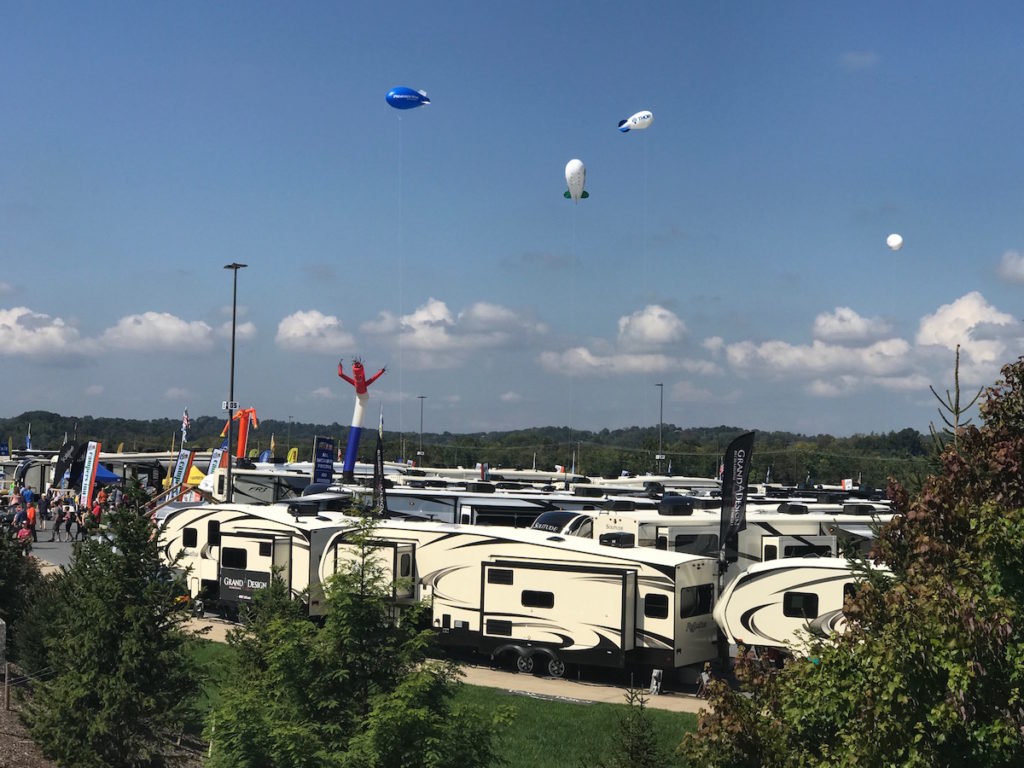 We planned to see the show over two days, because it’s such a massive show and there’s so much to see. We canvassed the show on Day One, and when the sun went down and the show closed, we made our way to the local Walmart to spend the night and hit the show the next day to see anything we may have missed and to dream a little more about what owning one of those giant Class As would be like.

By our return to the show the next day, it was clear that the toilet issue was still not fixed.

Now, I’ll pause here while you collect yourself because I’m sure you’re shocked to read that. 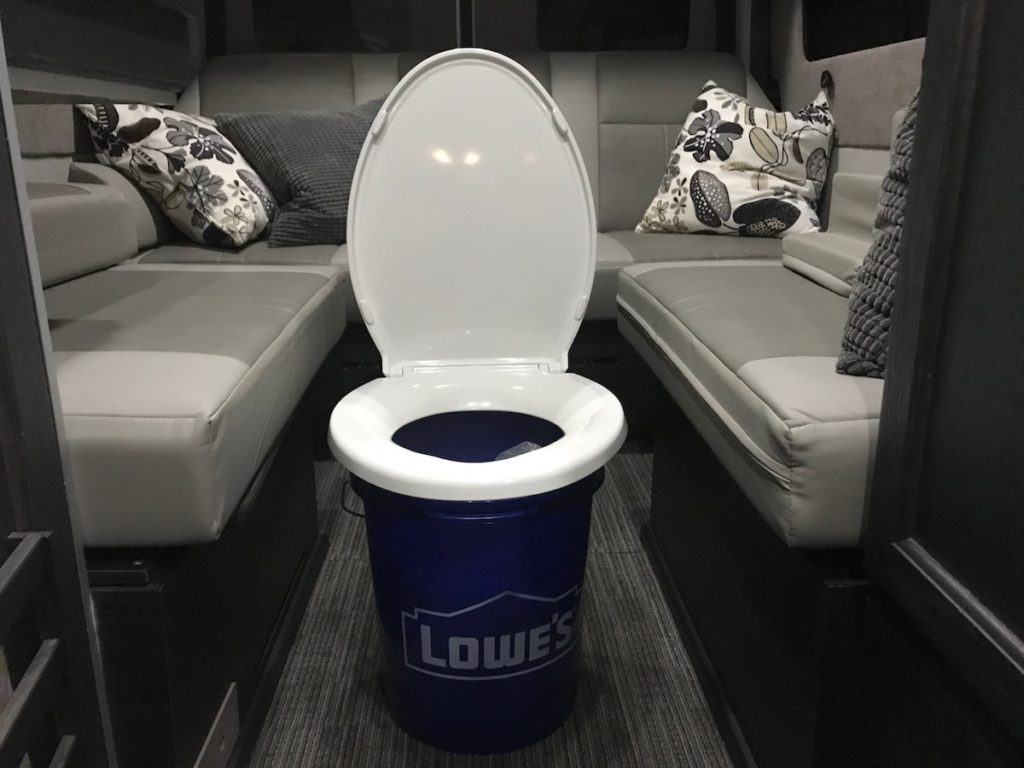 This would be a more effective toilet setup. At least we could put a lid on it.

Day Two we returned to the RV show with a new anger, frustration, and general hopelessness. No, those weeks and weeks at the dealer had not fixed the problem, which was as terrible as it had been from the beginning. We were ready to get rid of this problem van that had been repeatedly troubling us since that day two years ago when we bought it’s predecessor whose batteries didn’t charge and whose heating system didn’t heat, to this current van whose heating system also has been trouble and has smelled like human waste while driving among other items that we can’t seem to have addressed.

You might wonder, as any rational person would – if it’s been such a headache for so long, why put up with it? That’s a great question. We’ve always held out hope that if we could just get the few items fixed, this would be the van for us. And to be fair, these haven’t been minor issues. Batteries that don’t charge, heat that doesn’t heat, etc. are not minor issues like cabinets that constantly need to be adjusted because they slam closed on their own while you’re trying to put things into them as a completely random example. Another very compelling reason became clear on that second day at the RV Show when we returned to the competitors’ areas and decided to get some numbers from the sales people about what they could offer to help us get out of this van and into one that would hopefully give us a lot less stress. That number was a sizable gap between what I could expect for a trade-in value for my Adventurous and the price of a comparably equipped alternative. Without going into specifics, that number is large enough that I could purchase a well-equipped luxury vehicle instead of having to pay that amount to get rid of something because the manufacturer and their dealer network are unable to supply a fully working vehicle as promised in the paperwork on that fateful day two years ago when my loan company dutifully paid them in full. We visited the Roadtrek area of the show and asked if they might have someone there from the factory who we could talk to about possible causes, but we were told there was no one there who could help. And adding insult to injury, that demo Leisure Travel Van which would be available immediately instead of the 10 months to order a new one? It was now sporting a sold sign.

We left the show and started on our planned route around Pennsylvania, stopping at another Walmart for the night, and debating whether to cancel the trip and either head back to the dealer or just head back home to regroup. The smell is that bad when driving. Angry, frustrated, feeling hopeless, (all emotions I’m sure they must have put in their promotional brochures, right?) we decided to make the best of it, as best we could, and we continued on our trip, just deciding to keep the windows closed (because, really, who likes fresh air when driving through the picturesque mountains of Pennsylvania when the weather is bright, sunny, and perfect) and try to grin and bear it.

I’m glad we stuck with it because the trip itself was great. We saw some awesome national parks, a few hard cider breweries, museums for the logging industry in Pennsylvania and the railroad, and even an alpaca farm where the friendly owner greeted us and gave us an up close tour of the farm and her alpaca children. If you want a relaxing ride, Route 6 through northern Pennsylvania is highly recommended. 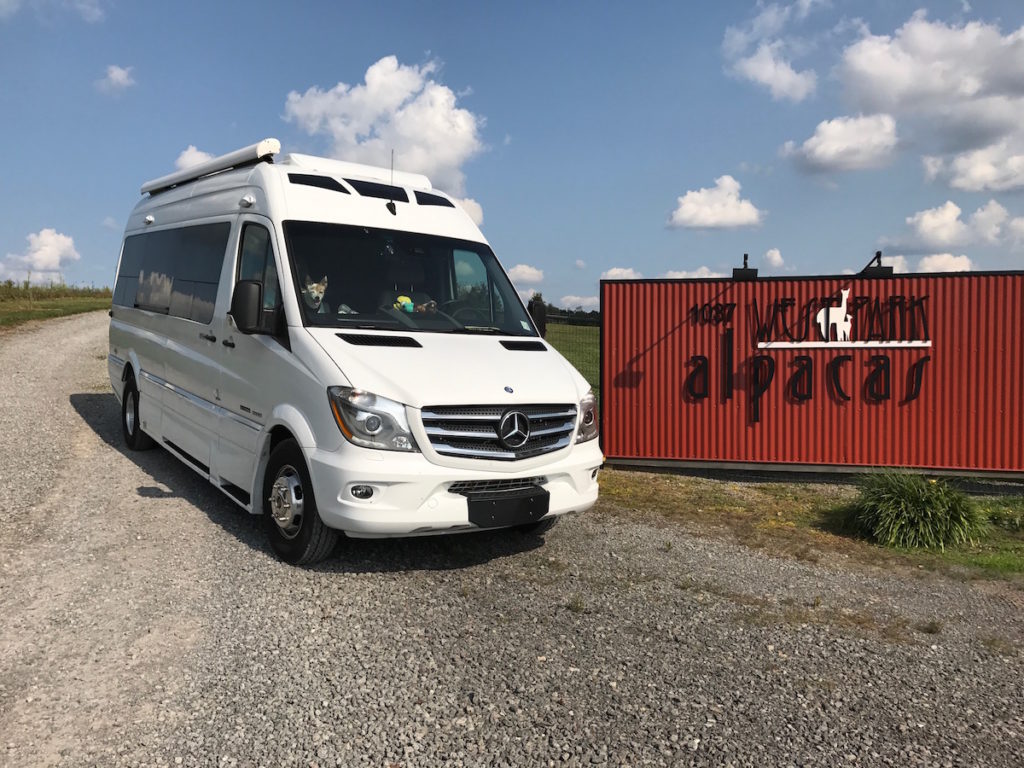 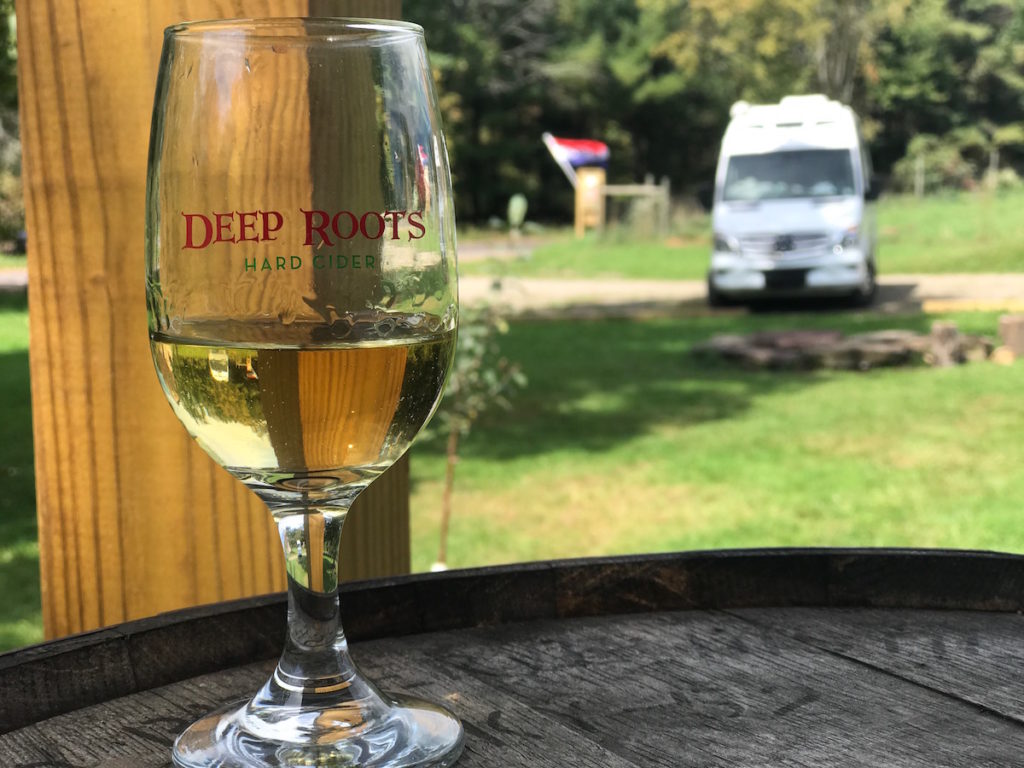 We met some great folks along our journey, including a nice couple who operate Deep Roots Hard Cider in Sugar Run, PA 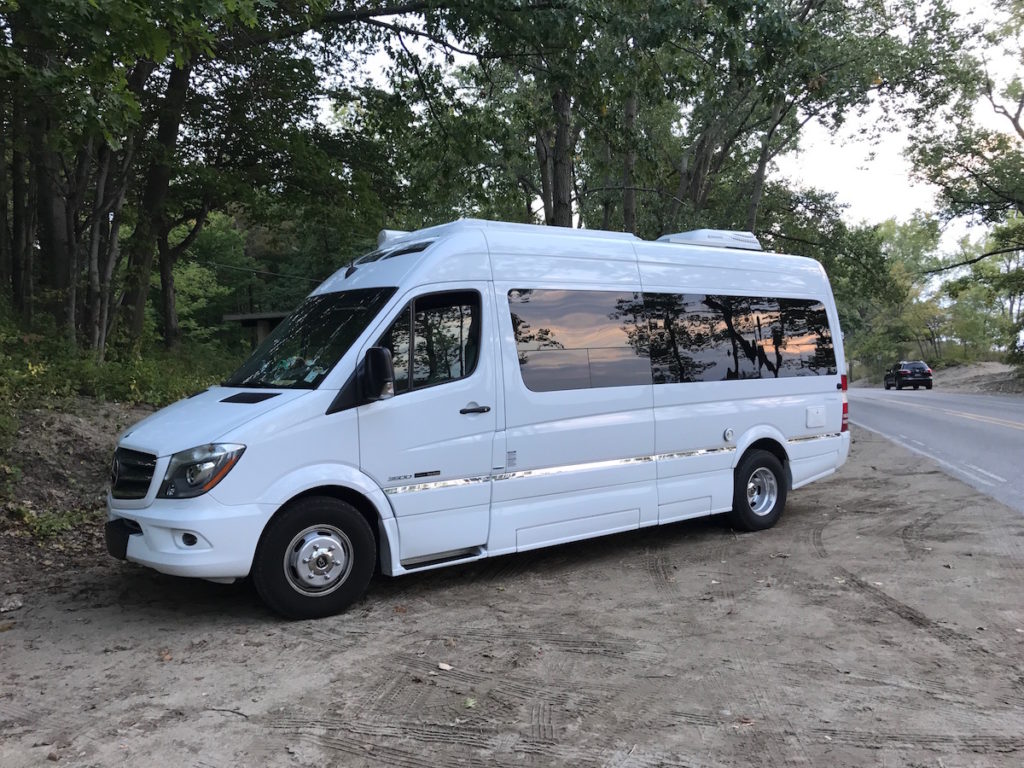 Presque Isle State Park – one of many parks we visited along the way.

But now we’re home and still have to figure out how to fix our smelly van. We received a comment here on our blog about our particular toilet model and the problems that others have found with it’s design. With this new knowledge, we contacted our dealer about possibly swapping out our Thetford toilet with a Dometic toilet which would hopefully fit and fix the problem, and the links provided by our commenter which clearly demonstrated the toilet’s shortcomings, were included in the email to them. Also included in that email, and as we have repeatedly explained to them, we listed all the things we have done to troubleshoot – keeping water in all the traps to seal off possible escaping fumes, having a reasonable amount of water in the tank, using holding tank chemicals, namely Happy Camper. The email was forwarded by the dealer to Roadtrek who responded with the suggestion to…try putting water in the traps to seal off possible escaping fumes. That might sound familiar to you because you just read that in the previous sentence, and I would think it would have sounded familiar to them as well, as I had specifically mentioned that I had already done that. Getting a different toilet model installed would require Roadtrek’s authorization, so the dealer suggested I contact them directly, which I did.

While visiting Pleasure Way at the RV Show, I saw promotional signage touting their new Personal Assistant program which promises a dedicated support person who is knowledgable about their product who can answer questions you have about your van. Whether this program is as great as it seems I don’t know, but I do know that I have never been able to reach someone at Roadtrek on the first call. Every time I have called them for support, I have reached an answering machine. They did return my call this time, and we went over the details of the problem I had been experiencing. The answer from the person on the phone? Try Pine-sol in the traps because those can let fumes…well, you know the rest. I understand that there’s a process when it comes to a company’s diagnosing and fixing a problem, and I have no problem following that process. But to repeatedly suggest solutions that we have already mentioned we have ruled out is..again, frustrating. However, I told the person that I would try it and let them know, just so we could all be sure that everything had been attempted. I won’t bore you here with writing about how we tried Pine-sol in the traps and it did nothing to solve the problem, because I respect you enough to know that you already knew that. So I emailed the person helping me at Roadtrek to let them know that it had not worked, and to find out what the next steps would be to try to get this fixed. Not hearing back, I emailed again. This time I got a response which included advice from one of their ‘seasoned technicians’ which I would bet at this point you could probably guess. If you’re saying to yourself, water in the traps, congratulations! You could probably do well in the RV support industry! I would almost swear that somehow, as my emails cross the border into Canada, someone is stripping out all the pertinent details I’m trying to share with them because I keep getting the same suggestions back.

So here we sit on our two year anniversary of RV ownership. We’re still together, but our relationship is strained to say the least. How do you tell your significant other they have an odor problem?