Part Nineteen – Smell Me Once, Shame On You. Smell Me Twice…

I’ve come to accept the fact that nothing happens quickly when it comes to RV repairs. It’s not entirely the fault of the repair center because once a problem is diagnosed they often have to wait for parts from the factory in Canada. Two weeks at the dealership has been pretty much the norm for us, that is if you consider our numerous trips for service normal.

We marched into the service department at the crack of dawn to hand over the keys and latest list of problems to tackle. At the top of the list was our waste smell, followed by the heating system fluid change. We headed off on our 2 hour journey home, a drive that has become all too familiar.

Two weeks later we get the call to come pick her up. Everything on our list had been addressed, but they inspected and were unable to find any leaks with the waste system. That did not sit well with me since the odor was INCREDIBLY obvious to us, but maybe they had pulled the toilet to check the seal and reseating it had somehow solved the problem. Hope does allegedly spring eternal. That Friday after work we drove up to retrieve her and headed home.

There is one very simple way to test the black tank…by Saturday afternoon our “testing” had revealed that the tank problem was not solved. You can imagine how frustrated we were to have made another 4 HOUR round trip and have the same problem remain. I should mention one more thing I’ve learned when it comes to RV repairs – they sometimes don’t get things right the first time!

Not willing to drag this on for weeks or months, we camped in the dealer lot on Sunday night and we were there at 7AM to hand them back our keys once again. This time I was very specific about the problem. If you have all of the windows closed there’s usually not an odor problem, but once you crack any of the front windows while moving, waste odor from the bath area fills the entire coach. The service tech takes the van out for a test drive, pulling away with the windows sealed. He returns about 10 minutes later, with the windows SEALED. The tech then says that he believes that what we’re smelling is actually glycol heating up in the heat exchanger under the passenger seat.

Picture, if you will, standing downwind and very close to a sewage treatment plant and you will understand what driving with the windows down smells like.

I then took the keys and did a quick spin around the block with the windows cracked, and sure enough within a minute we were stewing in waste odor. I then proudly pulled into the service lot to share with them my waste smell. Finally they agreed that something was wrong. The keys once again get handed over to the service department and we were on our way home once again without a working RV. 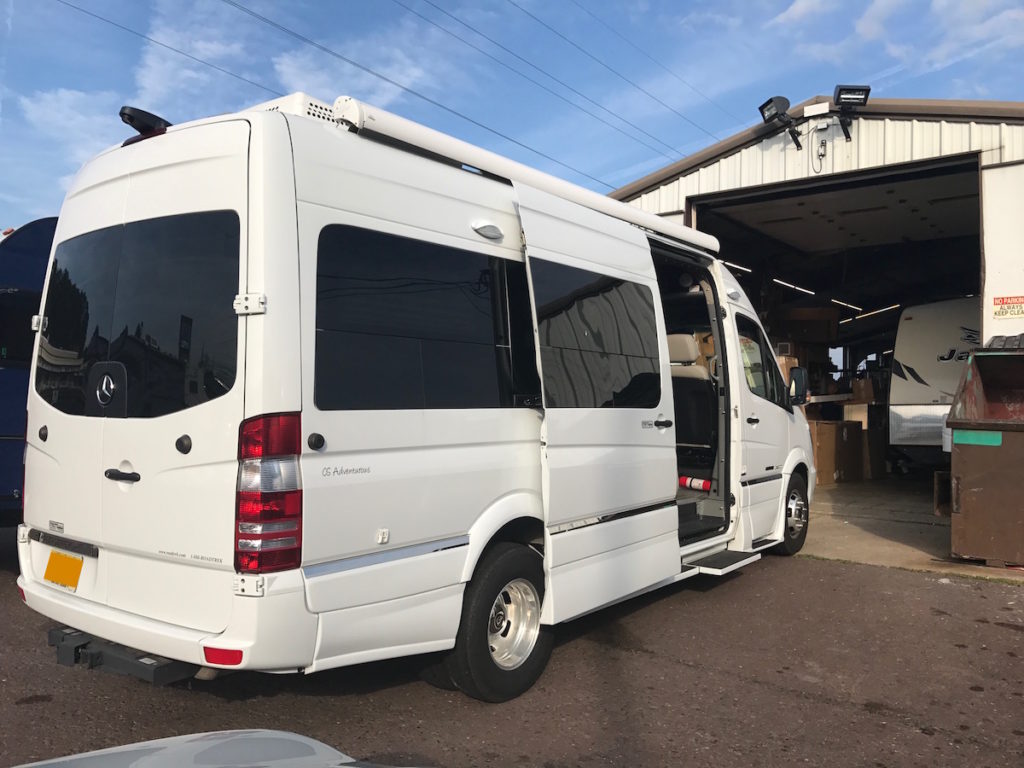 During the next round of testing, the service tech flooded the waste system by running water down the vent stack until the entire system was filled with water. They determined that “the seam of the toilet from the bowl to the base would leak under pressure. When the windows are cracked open this creates the proper pressure to allow the smell to escape from this seam”. Solution: Replace the toilet. Of course they had none in stock so we had to wait until one arrived from the manufacturer.

You guessed it, almost 2 weeks to the day and it’s ready to be picked up. There was no time for us to stick around to test the new toilet, so we headed home with what for the first time we could consider a fully working RV! (More Hope springing here.) We were only a couple of weeks away from the Hershey Pennsylvania RV show, so I began planning a road trip that would include a 2 day stop in Hershey, then off on a 10 day road trip though the mountains of Pennsylvania, and maybe even a little of New York. We have a fully working RV, what could possibly stand in our way now?

While waiting for over a month for our latest round of repairs, I began assembling a spreadsheet of all Class B and B+ brands. I wanted to put together a comparison chart that listed all of the weights and measures for each brand. Once I get the latest brochures and verify some numbers I’ll be sure to share with everyone.

Because when comparing RVs, it’s helpful to know just how much waste you could potentially be smelling while cruising down the road with your windows down, in gallons, for each model, because that’s a normal RV phenomenon, right?