It’s been quite some time since we’ve posted an update to our toilet troubles, and I’m sorry to report that not much has happened since our last chapter. Freezing temperatures finally arrived and we were forced to winterize without getting the toilet repaired.

We actually held out from winterizing a bit longer than we should have. It seems like winter in the Northeast hit quickly this year. One unexpected cold snap took us from comfortable temperatures to frigid within hours. The RV can handle a few hours below freezing, but with 20 degree temperatures predicted over a long period of time, we had to take drastic measures.

I had a couple rolls of batt insulation left over from a home improvement project. I also happened to have an old 8 foot long electric baseboard heater that was no longer being used. I slid the baseboard heater under the van in line with the holding tanks, then carefully wrapped the perimeter of the van with the batt insulation. It wasn’t pretty, but I managed to encapsulate most of the undercarriage. I didn’t sleep well that night, but come morning I was pleasantly surprised by the performance. It was 20 degrees outside, and the ground under the van was reading in the 40’s with a non-contact thermometer. I don’t recommend this method to anyone, but in an emergency it works! 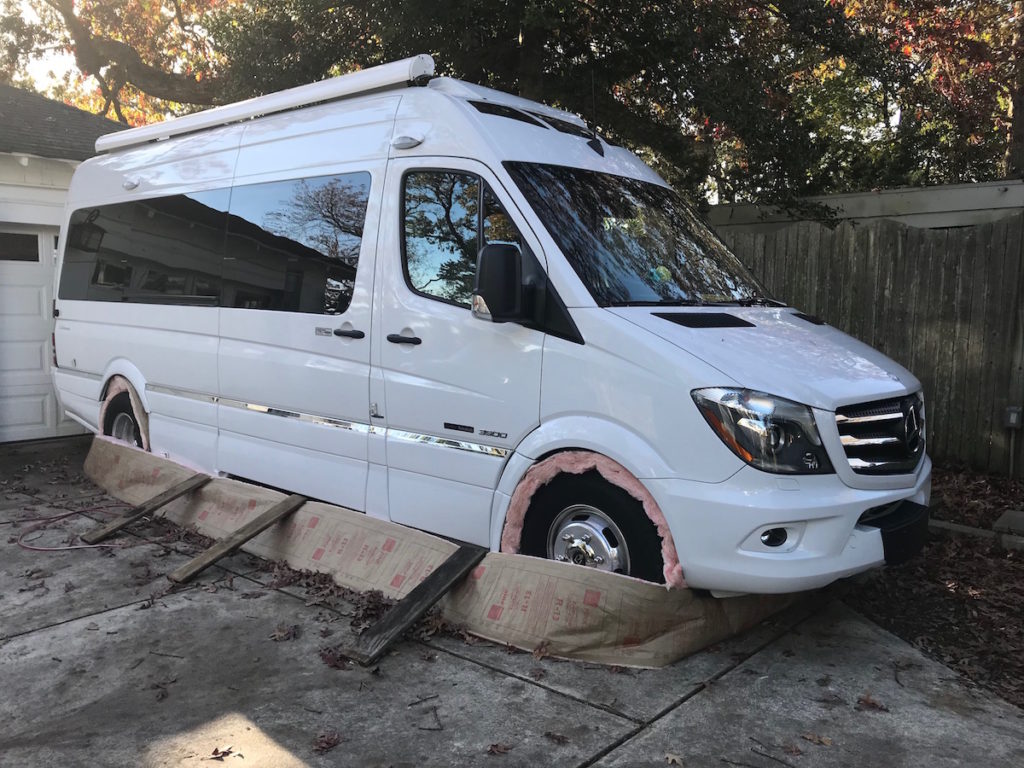 Our Roadtrek weathering the cold snap!

We finally were able to winterize once the temperatures rose slightly. Several emails to the dealership went unanswered, so after nearly 2 months of back and forth I finally contacted Roadtrek directly. My email was answered by the person I had been dealing with previously, and they remembered me from 2 months earlier. I was informed that Roadtrek never rejected the warranty claim for the toilet replacement. They claim that the dealership never submitted a warranty request before, during, or after the toilet replacement. So I’ve been waiting for MONTHS for the dealership to have it out with Roadtrek over the warranty claim, and no claim was ever submitted? This is beyond frustrating, and confusing. Maybe the service center is to blame for this after all! Fingers were being pointed in all directions, with me and my stinky van stuck sadly in the middle. (Though at this point it just smells like antifreeze which could be considered an improvement, really.)

After some back and forth with Roadtrek, I was told to make an appointment with another service center, something I could and should have done months ago. Maybe another set of eyes could have, and now maybe soon will, be able to diagnose and repair whatever is going wrong. I now have an open appointment to get this repaired once the freezing temperatures break.

So what happened to my original service center? Did they have enough of me and/or Roadtrek and just decide to ignore me? Finally out of the blue, I received the answer I was waiting for. The service manager apologized and said that my emails were being sent to the wrong inbox and he wasn’t receiving them. He was very nice on the phone, and said that they still want to service the van and get everything working correctly. That’s great news for me since that’s all I’ve wanted for the last 2 years!

I now have to decide where to take the van for it’s next attempt at repair. I think I may keep the appointment at that new service center. I think a fresh pair of eyes may be a good thing for everyone involved.

One funny quote from my phone call with the service manager – he had been  doing some googling to troubleshoot my toilet problem, and while speaking with him he asked, “Hey, you don’t happen to be the author of classbwarned.com”? Yes, and hi!

We’ve still decided to explore the other options out there while we pursue getting the van repaired. Work will prevent us from heading south for the big Tampa RV show, but we’ll try to hit a couple of the local ones in the coming months.

Luckily it’s winter, so the windows will be closed.