Part Fifteen – Glycol, But Not THAT Glycol

Here is the new layout of our Alde system, as modified during our trip to the factory. 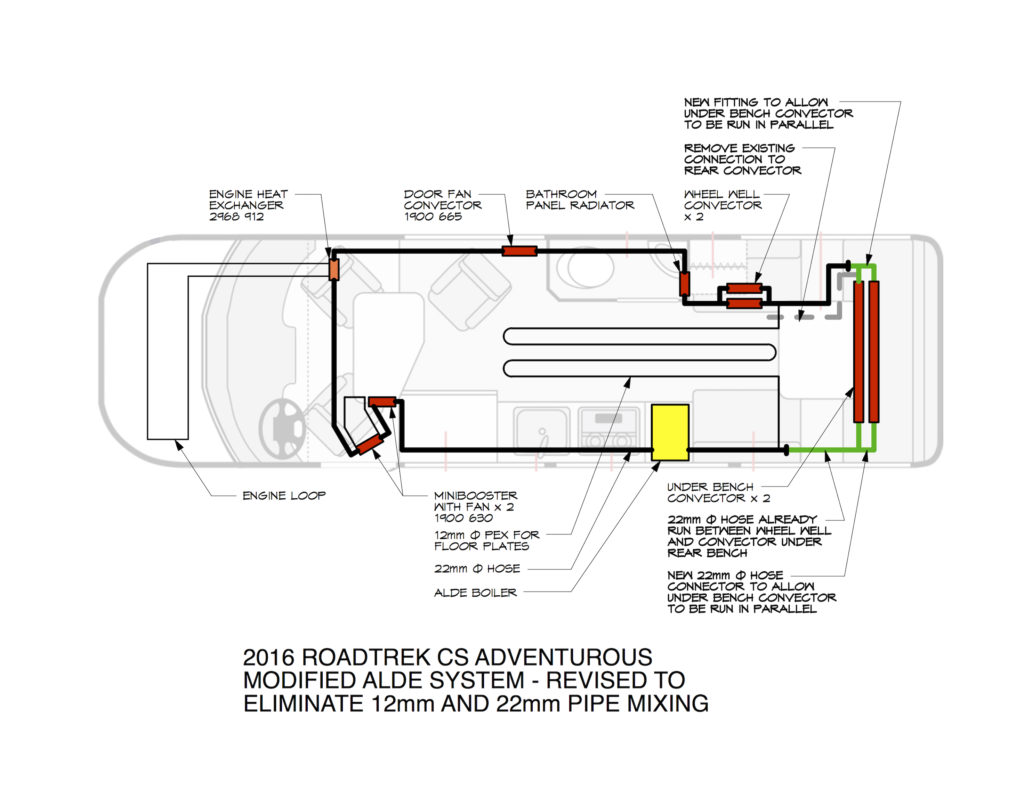 When filled with glycol, it works great. Figuring out what to put in and how is another story.

We learned the hard way that not all propylene glycol is the same. Despite tracking down pure propylene glycol at the Tractor Supply Co. store and spending the time to mix it with distilled water and refill our now-empty Alde system, when we got home from our Canada trip we learned that that is probably not the right thing to put in the system. We say ‘probably’ because no one – not Roadtrek, not Alde themselves – can give us the answer as to what needs to be put in. Roadtrek told us clear propylene glycol and water, while Alde said they don’t know what the US systems are currently using.  Doing further research on our own, the general web consensus was that it was important to have inhibitors in your glycol mix to protect the aluminum parts – which is not found in the clear, pure propylene glycol we had found which is apparently fed to cattle as a kind of medicine whom I believe do not in fact contain any aluminum parts. Deciding to empty the system, and seeing the now yellowing glycol fluid coming out only confirmed that it was probably not the right fix. We were able to find the right (?) stuff which at least has inhibitors in it at a local auto supply store, and a full day’s work to drain, empty, and bleed the system was rewarded with heat again. Of course, the floor stopped getting warm when the system first drained dry while making our way home from Canada, but a helpful post on Facebook suggested that it was possible to pinch the heating loop right before the floor splits off while the pump is running to force the flow through the floor and hopefully dislodge any pesky air bubbles hanging around in there. Alde would normally recommend their proprietary bleeder kit to accomplish this, but unless you’re a dealer you wouldn’t have access to one, and experience showed us that even dealers may not have the kit without requesting it from Alde. We pinched, bled, pinched again, and bled again, and finally the floor was heating once again. 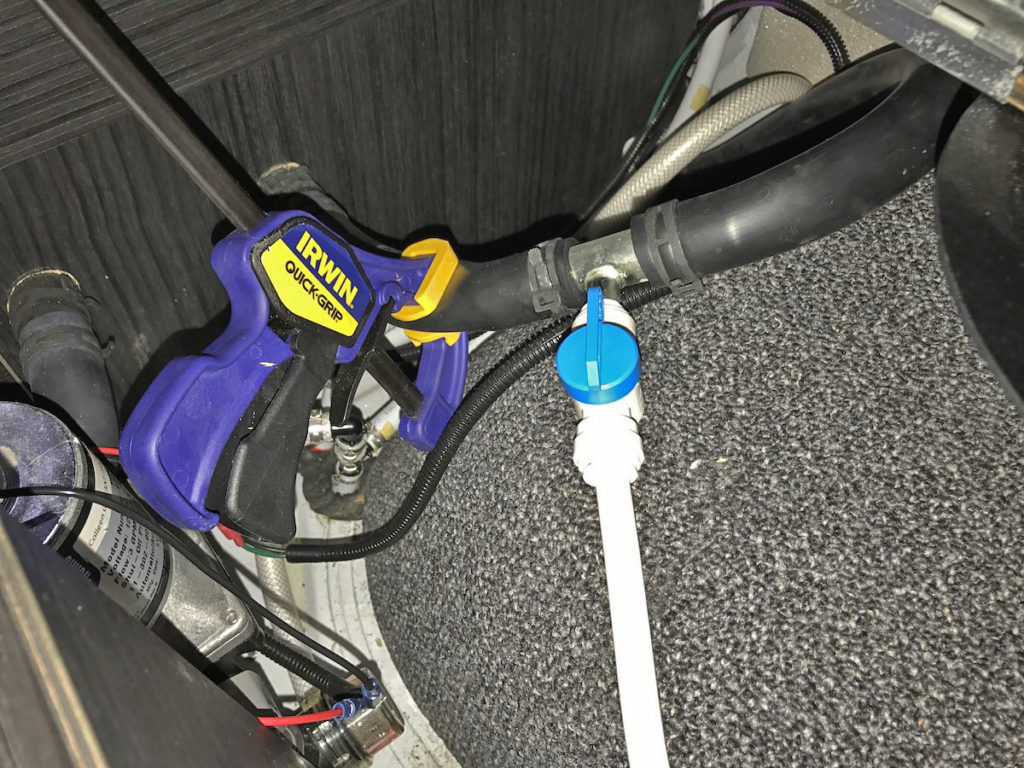 This is where we pinched the loop to get the floor bled. Who needs an expensive proprietary bleeder kit when you have clamps?

As a side note to any fellow Alde users – get an extra bottle of glycol from your dealer if you can. The previously used pink-colored glycol we had started with originally is easy to find, but the clear glycol (whatever it actually was) we had gotten from Roadtrek is nearly impossible to find at brick and mortar stores. And while the pure stuff for cattle is accessible, if your Alde system isn’t mooing, it’s probably not the best solution.

At this point, the glycol leak that had plagued us after leaving Roadtrek had stopped. We had done a few things that may have solved the problem. The first was to follow the advice of the Alde tech we had spoken to on our trip home, which was to smack the flow assembly. We did this much harder now that we were safely at home and no one was around to hear it complain. We also adjusted the position of that flow assembly and it’s bleeder valve because it was installed at a slant which didn’t match what we were seeing while doing research on the web. If there was a float mechanism that made it work, maybe the slant was interfering with it’s floating performance. There was a broken plastic clip on the side of the boiler which looked like it once had held the flow assembly in place, so some strategically placed zip-ties corrected the slant of the assembly so it is now sitting level and hopefully floating without a problem. One problem down. 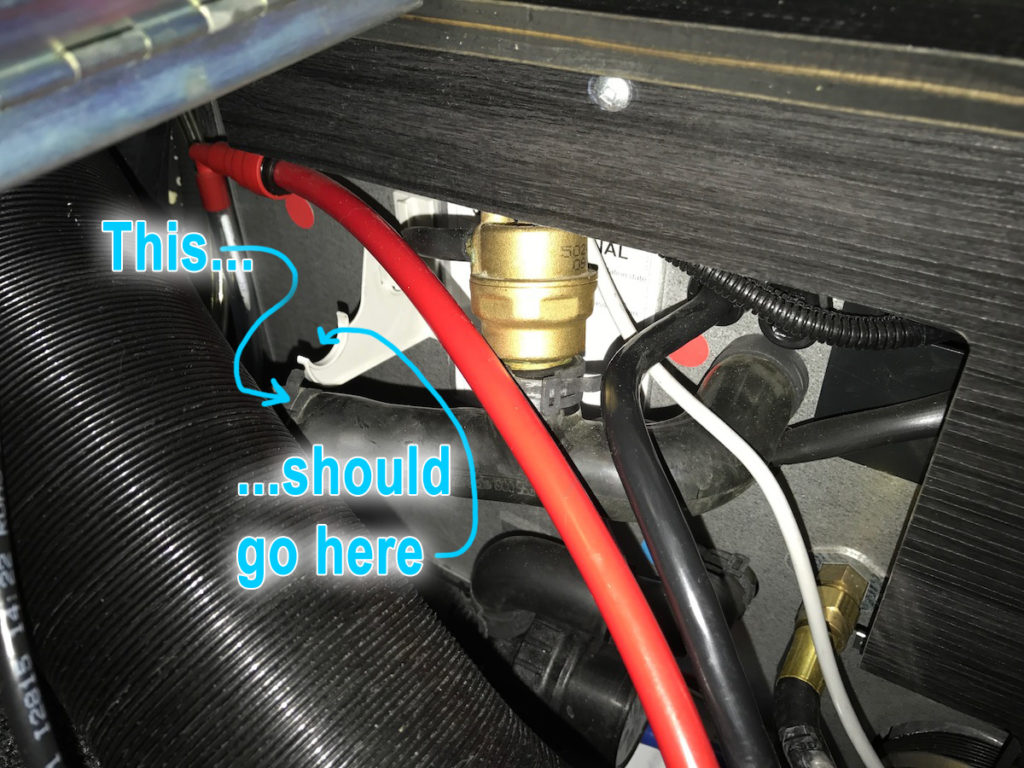 The other pending issue had also arisen on our trip back from Canada, which was the Alde system momentarily losing power and rebooting while in use. While using the system on the way home (at least during the brief period it wasn’t leaking), we had heard a soft click from the boiler and the control panel went dark for a second before coming back on, flashing error messages and random temperature numbers, and seemingly rebooting itself. It did this twice over the course of the trip. Now that we were home, we thought we could narrow down whether the system was simply losing 12 volt power for a second; this seemed unlikely because no other 12 volt fixtures had flashed or shown any signs of losing power. We turned on the Alde, waited for it to get heating, and then turned off the 12 volt power at the battery disconnect switch for the coach, turning it back on a few seconds later. The control panel went dark as expected, but when the power came back on, the restarting procedure wasn’t the same as the strange rebooting it had been doing on it’s own – there was no error message and temperature flashing as we had seen on the road. So we don’t know what’s going on with the intermittent rebooting, but we’re going to guess that’s not normal behavior.

We have had contact with Roadtrek and they have authorized a replacement of the Alde boiler if we get it to the dealer for service. This requires yet another trip to the dealer for a repair that could take days or even weeks as we have seen, and we were planning to visit the big RV Show in Tampa, Florida which was coming up in January, so with the system seemingly working well enough, we decided to wait to visit the dealer for service. Besides, if the RV Show presented an opportunity to replace our current van with one that was more reliable, we didn’t want to waste the chance to see what else was out there, especially with everything we had dealt with so far with our Roadtrek(s).

It was off to Florida (with the hose and cord which Roadtrek had neglected to put back into our van when they serviced it the month before and which they had only just returned after repeated phone calls and emails a month after notifying them of such, and of course, an extra bottle of glycol).