We loaded up and headed north to Roadtrek headquarters in Kitchener, Ontario. We arrived in the morning and were greeted by the immensely charming woman working the front desk who connected us with the service man who’d be working on our van and our tour guide who kindly offered to take us through the factory while they began working. We reviewed all the issues we had – taking a look at the Alde system (including our own diagram that we had worked up showing the proposed layout), replacing the board that goes between the seats in the back to create the bed that was always a bit small, and a few other minor annoyances – and we were given a walkthrough of the assembly building which was really a fascinating look at how much work goes into each van’s construction, and just how much of the whole process is truly handcrafted. 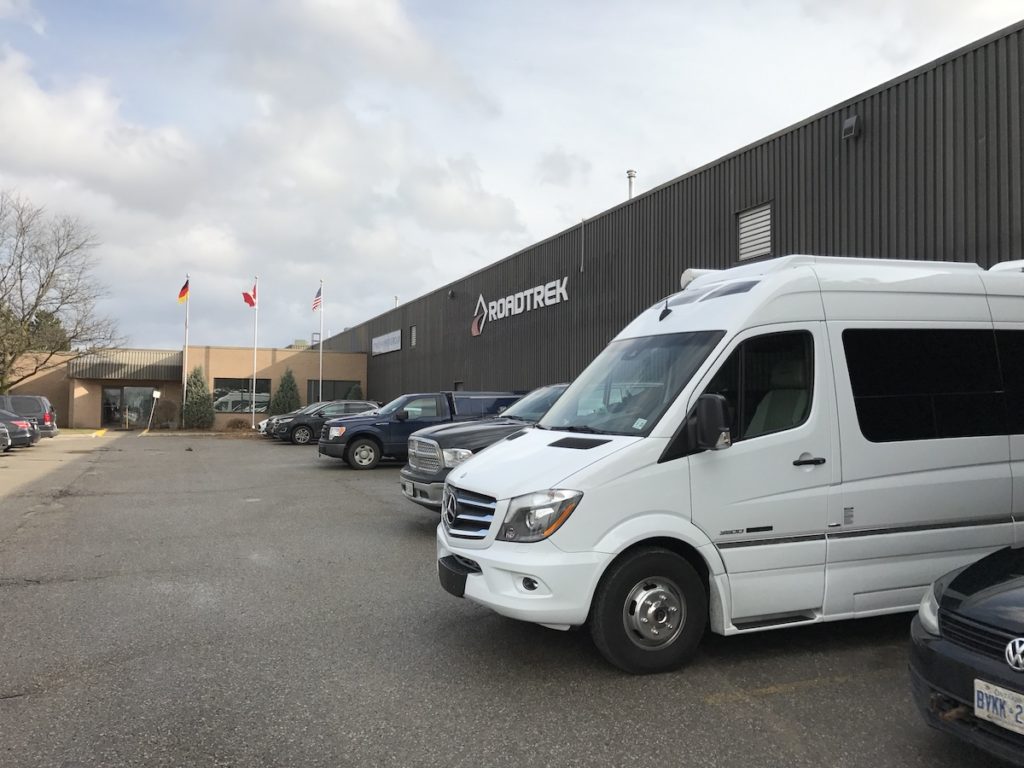 A homecoming for our Roadtrek. Get comfortable, you’ll be here awhile, and then you’ll be back again later.

Once our walkthrough concluded (sorry, no spy shots), they were kind enough to offer a rental vehicle so we could see the area and get back to our hotel that night while they kept the van to work on our list and re-plumb the heating system to production specifications. It’s a nice area to check out, and if you decide to visit, rest assured there are things to do in the Kitchener area while you wait.

We returned the next morning to pick up our van, confident that finally things were all taken care of and we were ready to be on our way. And everything was fixed! Finally, all the annoyances and trips to the dealer were going to be a thing of the past. And we lived happily ever after. The End.

Then we saw the puddle. 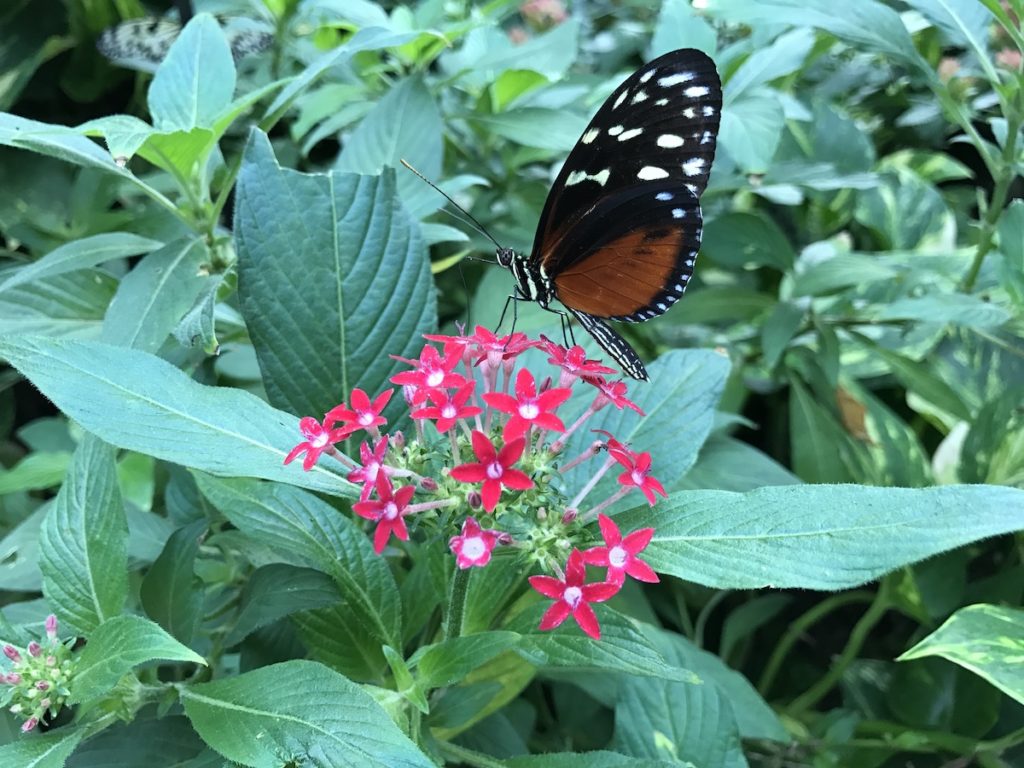 If we listened carefully, we could almost hear this butterfly telling us the van was still broken. Unfortunately, we couldn’t quite hear him over the sound of the birds and waterfall.

On the way out of town, we decided to visit a butterfly conservatory in the area before getting on the road and making our way west through Canada and eventually south back to the US. After a leisurely stroll through, we returned to our van and beheld a puddle that had formed under the vehicle in front of the rear driver’s side wheel, right under the Alde boiler. A drip was dripping from a small black tube right over the puddle, which looked to be coming from the point where the heating piping exited the boiler inside, and the tank of glycol, which runs through the heating system to radiate heat, was slowly emptying . Of course, these things will always happen around 4:30 pm when people have gone home. A quick call to Roadtrek, and we were told to bring it back in the morning to have it looked at. To their credit, they offered to pay for the additional night at the hotel because we had to head back and check back in to stay the night. Luckily we hadn’t gone too far out yet.

We went back to Roadtrek in the morning, and they replaced the flow assembly – a piece on the heating system piping includes an automatic bleeder valve that for some reason had failed, causing the leak. We said our thank yous (again) and our goodbyes (again), and set off once again. THIS time we were going to leave completely satisfied. Driving west we used the engine loop to heat the Alde system (which is really a great feature) and we and our feet were toasty warm. The rest of the trip was uneventful and finally all had been fixed.

Then we saw the puddle. Again. 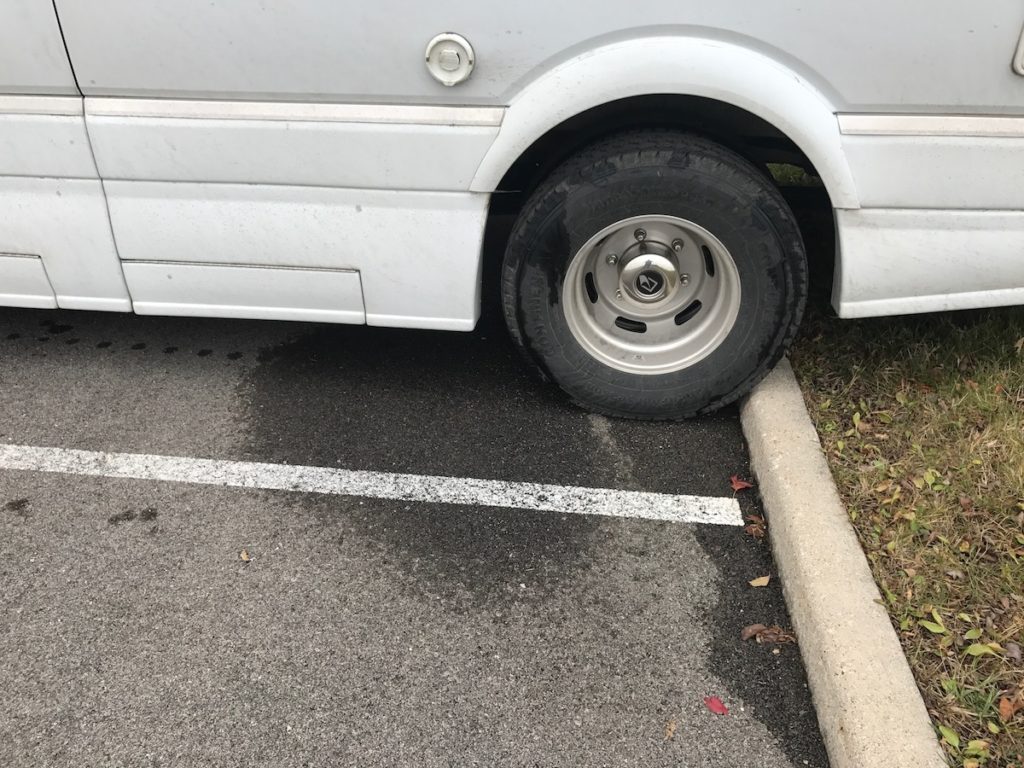 I’m not an auto mechanic or RV expert, but I would say that leak is not a good thing.

The next day we noticed the small puddle in the same place under the van. Just a small puddle so we figured/hoped it was just a little normal relief leakage and nothing to worry about. We went to sleep that night hoping the slow leak would subside. Unfortunately, the next day, when we returned to the van after spending the day touristing (which by the way, if you make it to Michigan, you should check out the Henry Ford Museum – hopefully your vehicle won’t be slowly breaking down in the parking lot while you peruse the classic cars), the puddle had grown significantly and the glycol tank was once again emptying at an alarming rate. These things will happen at 4:30 pm on any given afternoon, and especially so at 4:30 pm on a Friday afternoon, when there’s no hope that the problem could be fixed until at least 2 days later. Roadtrek was closed, so we called Alde directly and a kind gentleman with a British accent told us that the part that was leaking really never fails, and to give it a whack because it works with a float mechanism and hopefully smacking it would release something inside that may have gotten stuck. Yes, seriously. We thanked him, smacked it, and watched as the glycol continued to leak out slowly for the rest of the evening.

We awoke in the middle of the night to the sound of air and water bubbling through the piping, a completely dry glycol tank, and temperatures inside the van in the low 50s (that would be Fahrenheit because we were now back on the US side of the border). Our Saturday morning and early afternoon was spent automotive store hopping in the Michigan area trying to locate the propylene glycol that they now used in the heating system. Fun fact – you won’t find it. At least not in the automotive stores. After repeated ‘no’s we returned to Google to find out where it could be found. Finally, someone on the internet mentioned it was used for livestock and sure enough, we found a bottle at a Tractor Supply Company store in the cattle supply area. We purchased distilled water and mixed it 60/40 with the propylene glycol as we had been instructed, and refilled the tank on the heating system. Luckily, we managed to get through another day and a half, long enough to get home and not freeze overnight, before we finally arrived home and the tank was once again dry.

All the way to Canada, two visits to Roadtrek HQ, and we still don’t have a fully functioning RV. It’s almost funny, really. But not quite.

Now I wait to hear from Roadtrek about what to do next.

UPDATE: I went out to the van tonight to plug it in to charge and my power cord and fresh water hose, both of which were in the back of the van for the trip to Roadtrek, are gone. Not only did they not fix what was wrong, they kept my cord and hose. Terrific.