I drove home on November 13th with my new RV, still excited and wanting to move on from the 30+ days I had to wait to get it fixed.

It was chilly that night, and finally time to move in to the RV. We were stocked up on snacks, pillows, bedding…all the necessary accoutrements. It seemed like a good time to test that fancy radiant heating system I had heard so much about. We turned on the system.

The Alde radiant heating system and accompanying 3010 digital control panel are not difficult to operate. Turn on the system, set your desired temperature and fuel choice (all propane, propane and electric, or all electric), and wait for warm and toasty conditions. 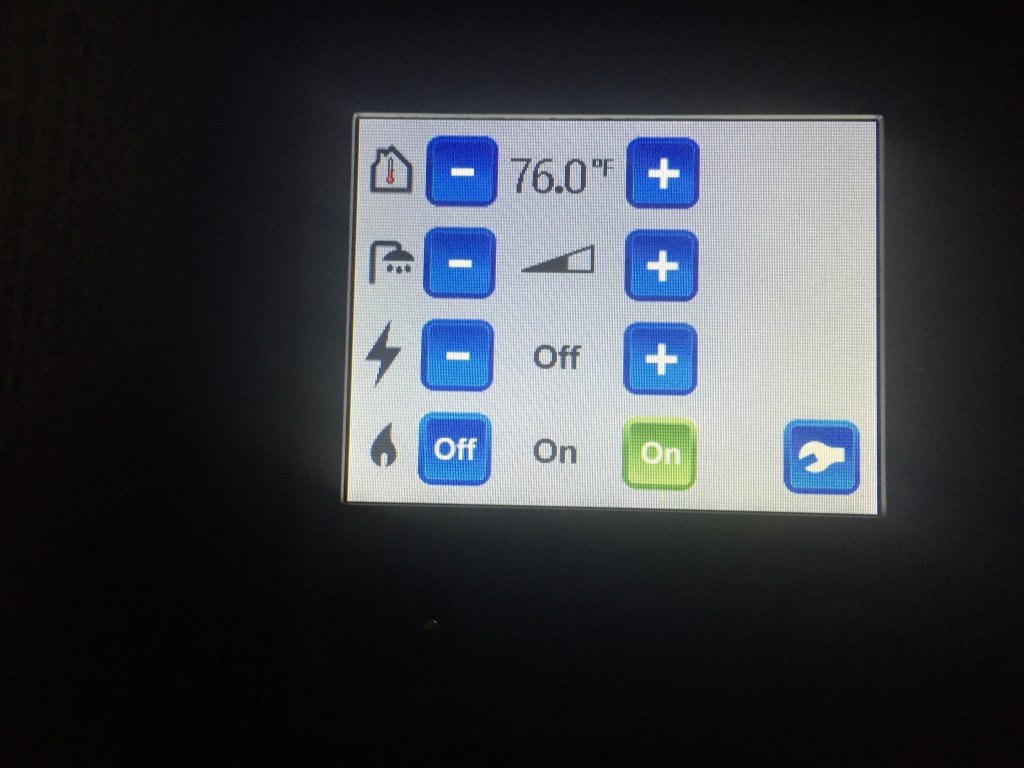 The first part, turning it on, was a breeze. Having the RV plugged in to shore power, and figuring ‘why waste propane when we have electricity’, we set the target temperature to 74º (it was 50º outside) and waited. It didn’t get warm at all, so consulting the manual (always a good first step) we discovered our Alde system was suffering from a distinct lack of 120V power. Finally, again after scouring the manual and the internet for suggestions, we decided to look at the boiler itself and found in the compartment where it was stored that the electrical plug for the boiler was…unplugged. This closed compartment also housed the new battery system parts that had been installed with the equalizer so someone in service must have unplugged the boiler and neglected to reconnect it (and forgotten to clean out all the metal shavings left in that compartment from I assume the equalizer install). We turned on propane along with the electricity, hoping that would improve the heating performance, but after letting the system run all day we only reached an interior temperature of 68º according to the thermostat on the Alde system. A handheld thermometer showed an actual temperature inside of only 58º. Something was clearly wrong.

While waiting for the heat that never arrived, we figured we should test as much as we can in the coach because the batteries and now the heat had been such problems. Our panel that displays water, propane, and electricity levels, told us the fresh water tank was empty, so to be sure we were starting with a really fresh tank of water, we opened the drain valve expecting a little trickle of water before we filled the tank. That trickle lasted throughout a lunch break – the tank had apparently been full or close to it from the dealership, but we didn’t know that because the tank sensor was always reading empty. We closed the valve, filled the tank (to overflowing), and still the tank sensor read empty.

Back to the dealership! Yay!